So this post is less about my writing and more about the works of J.K Rowing. When the books first came out I never really understood what all the fuss was about. Maybe it was just me and what was going on in my life at the time or maybe it was because the more people that raved about them that made me not want to read them, Like over exposure to a song.

This happened to me with the Matrix films. One of the ‘really annoying’ kids at school told me about it and told me that I needed to watch it, but just to be stubborn and possibly just to spite him I refused, much to his chagrin. Needless to say, as I have gotten older I watched the Matrix trilogy just to see what all the fuss was about… Annoying kid at school?  You were right they are awesome and sorry to have ever doubted you – but I digress.

Harry Potter… I’d read the first book and thought it was ok then began reading the second and thought “I like the idea and the world, it sounds really interesting, but really?  a flying car?” At this point I put the book down, never to pick it up again. The films came out which, on the whole, I really enjoyed.  I thought the casting was almost perfect, even though I was never the biggest fan of Daniel Radcliffe as Harry, but his version of the Pot-meister was believable.

I had always intended to give the books another try but just never had the time or money to pick up the books.  Then of course there was the struggle in finding the time – between writing my own stuff, parenting, working full time, cooking, housework, and general family time there was never any reading time.

Furthermore, in my opinion there is no such thing as “reading for 5 minutes” There is either “magazine article” or “2+ hour session”. They are the only 2 modes I have.

Then I discovered Audible.

I would just like to point out that this isn’t meant to be an app review etc but I love Audible! I’ve underlined it and emboldened it just to stress that fact that this is probably the most used app on my smart phone.

I get charged £7.99 a month which adds a credit onto my account.  With that credit, I can buy any book I want. And on top of that, the 40-minute drive to and from work has now become reading (listening) time. Which is brilliant, and I’m pretty sure it’s also reduced my blood pressure!

I started by listening to Dune because I have never been able to actually find the book to read.  That book is brilliant, and helped me understand the film so much better. I wondered what to listen to next, hungry for more. I watched “Fantastical beasts and where to find them” and knew that I needed to get back into the wonderful world of J.K Rowling.

I’ve just finished book 4 (Goblet of fire) and I totally get it now! I love the characters and the story lines. I love the world that is painted on the back of my eyelids as I listen. The narrator, Stephen Fry, is a personal hero of mine, he is a legend! He brings the world to life, even the flying car section in the second book which I still find irritating (I don’t know why)

My experience of it all is slightly marred as I know what’s coming, or at least I have a rough idea as I’ve seen all the films. Don’t worry – No spoilers. But I love the world.  I love the headcanon’s and theories put forward by the fans, (my personal favourite being ‘Drarry’ (Draco and Harry) 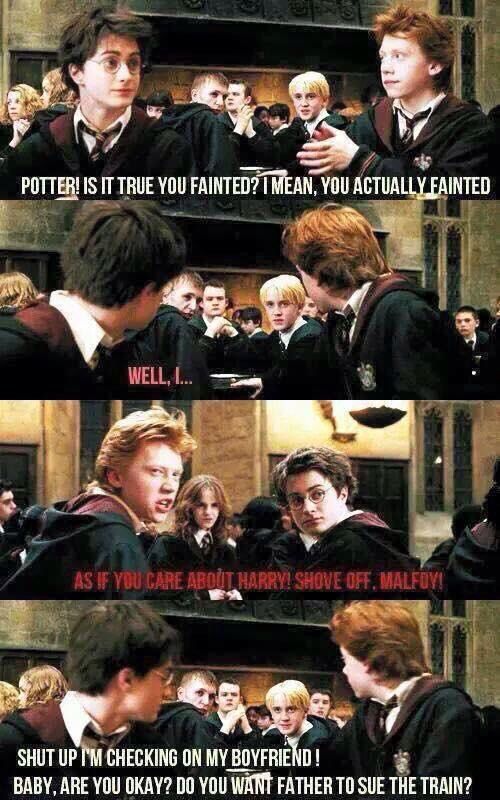 I quite like the idea of Neville and Luna getting together too. I really enjoy people’s thoughts on where these characters would be today, so many years on.

I think what marks a character as great, is when people can’t get enough of them. It’s been ten years since the deathly hallows was released and 6yrs since the 2nd deathly hallows film was released and people still talk about harry potter.  It is woven into everyday conversation and common phrases. People even wonder which house their favourite character from unrelated shows would be in if they had gone to Hogwarts.  Dr Who, The Avengers, Supernatural and Sherlock just to mention a few. These are the kind of stories that encourage me to write what’s in my heart, hoping that I can create characters as rich and as interesting as the ones J.K Rowling has given us.